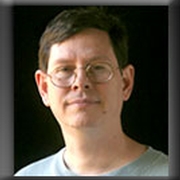 Andrew D. Ellington received his B. S. from this department in 1981 having worked in the laboratories of Fritz Rottman and Michele Fluck. After graduating, he went to Harvard to pursue his Ph.D. He is now an internationally-respected leader in the design and technological application of RNAs that specifically bind small molecules (aptamers) and RNAs that execute enzymatic functions (ribozymes). His work combines a deep understanding of enzymology, bioinformatics, structural biology, and molecular biology. Most of the research for his doctorate was conducted at the Eidgenossische Technische Hochschule (ETH)-Zentrum in Zurich, Switzerland, under the direction of Steven Benner. Their eight publications include two Nature letters, two PNAS papers, and a Science letter. After receiving his Ph.D in 1988, Dr. Ellington joined the laboratory of Jack Szostak in the Department of Genetics at Harvard and the Department of Molecular Biology at Massachusetts General Hospital. As a Research Fellow, Ellington probed the mechanism of self-splicing of the Tetrahymena rRNA intron. He also developed the concept of designing RNAs to bind specific small molecules. Six research articles coauthored by Ellington and Szostak include four Nature publications and one J Mol Biol article. Dr. Ellington is now a professor at University of Texas at Austin and (since 2001) the Kathryn M. Fraser Scholar.