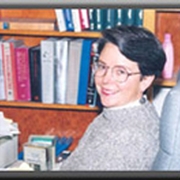 Ann Aust received her Ph.D. in 1975 under the direction of Clarence Suelter. She has made significant contributions to our understanding of the mechanisms by which transition metals, primarily iron, are involved in gene transcription, toxicity, and carcinogenicity. Ann has served as Manager and Director of Genetic Toxicology at Warner-Lambert/Parke-Davis, and as a Nonresident Lecturer at U of M. Currently a Trustee Professor at Utah State University, she was named Outstanding Professor in 1993.