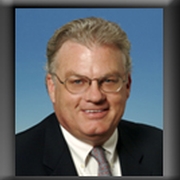 John Pierce joined our BMB graduate program in 1976 after receiving a B.S. degree in biochemistry from the Pennsylvania State University. He completed the Ph.D. program in four years (1980) and left with no less than 10 publications. For his thesis, he worked in the laboratory of Dr. N. Edward Tolbert on RuBisCO (ribulose 1,5-bisphosphate carboxylase/oxygenase) that carried out carbon fixation in the Calvin cycle. Pierce brought the power of synthesizing specifically labeled substrates (e.g. 13C-enriched carbohydrates) that was being pioneered in the laboratory of Dr. Robert Barker, to the Tolbert lab. Thus, Bob and Ed served as co-mentors for Dr. Pierce. Together, a rapid spate of publications on the enzymology of RuBisCO resulted.

After short post-doctoral stints at Cornell University and the University of Wisconsin, Dr. Pierce joined Dr. George Lorimer (1972 Ph.D. from this Department; 1986 Boezi Award winner) at DuPont’s Central Research and Development department. The advent of recombinant DNA technology allowed the DuPont team to clone RuBisCO, from which the determinants of substrate specificity, the partial reactions and intermediates, the role of the large and small subunits, and the kinetic mechanism were all elegantly worked out.

John Pierce has stayed at DuPont for over 27 years, moving between the Central Research and Development and the Agricultural Products departments. With each move, he has taken on increasing responsibility (research manager, research director, director of strategic planning, and vice president) and he has acquired a breadth of experiences (e.g. posting in Paris, France with responsibilities for agricultural products in Europe, Middle East, and Africa). He was the leader of the DuPont group that developed the first transgenic product (high oleic acid soybean oil) that came out of genetic modification of plants with altered lipid profiles. He was the director responsible for technology transfer, licensing activities and regulatory activities related to crop genetics. More recently, he became Vice President, DuPont Bio-based Technology, responsible for the use of biology, engineering, and material sciences approaches to biomedical materials, industrial chemicals, and biofuels.