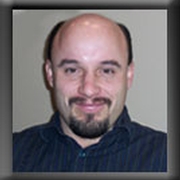 Michael Washburn entered the Ph.D. program in Biochemistry and Environmental Toxicology at Michigan State University in 1992, after receiving his B.A. degree in Chemistry from Grinnell College in 1992. Under the mentorship of Dr. William Wells, Michael received his Ph.D. degree in 1998. Michael and Bill co-authored seven papers on mammalian glutathione dehydroascorbate reductase and thioltransferase enzymes which were published in Biochemistry, the Journal of Biological Chemistry, and Methods in Enzymology.

Michael did postdoctoral work in the laboratory of John Yates, III, in the Department of Molecular Biotechnology, University of Washington, in 2000. He continued his collaboration with Dr. Yates as a Staff Scientist and then a Senior Staff Scientist at the Torrey Mesa Research Institute, San Diego, California where he developed and applied new approaches to proteomic research, which resulted in sixteen important publications, including papers in the Proceedings of the National Academy of Sciences (3 papers), Nature, and Nature Biotechnology. His seminal work has contributed much to our understanding of complex biological systems and protein-protein interactions. Michael is currently the Director of Proteomics at the prestigious Stowers Institute for Medical Research, Kansas City, Missouri.

Dr. Washburn is an acknowledged world leader in the field of proteomics research. He is known for his ground-breaking proteomics research, particularly for qualitative and quantitative analysis of complex protein mixtures and protein complexes, using mass spectrometry of peptide fragments. He has analyzed very large protein complexes, such as those found in the transcriptional regulation of genes and in the regulation of chromatin structures.

In addition to his pioneering proteomics research, Michael has worked collaboratively with a large number of outstanding investigators in gene regulation, including Drs. Ron and Joan Conaway, Jerry Workman, Ali Shilatifard, and Nouria Hernandez. Some of their work is among the most influential in the gene regulation field.