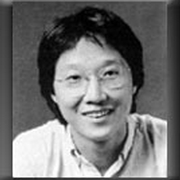 Ming Tien received his Ph.D. from this department in 1981 having worked in the laboratory of Steve Aust. He was recruited to the MSU BMB graduate program by Dr. John Boezi who chaired the graduate admissions committee at that time. Tien's thesis work was on the involvement of chelated iron and activated oxygen in radical-mediated peroxidation of lipids. This resulted in 10 publications. Of particular significance was the work on lignin degradation and oxidation of persistent environmental pollutants by a white-rot fungus, published in The Journal of Biological Chemistry and in Science. During Ming's post-doctoral work with Dr. T. Kent Kirk at the Forest Products Laboratories (Madison, WI) they discovered the first lignin-degrading enzyme, lignin peroxidase, which was reported in a Science article. Since then, Ming has been a world leader in the field of peroxidases that degrade lignin. In 1985, he joined the faculty in the Department of Biochemistry and Molecular Biology at Pennsylvania State University, becoming an associate professor in 1987 and professor in 1993. In 1986, he was honored with the National Science Foundation Presidential Young Investigator Award. Ming has also been recognized for his teaching at Penn State, winning the Tershak Outstanding Teaching Award in 2004. He has been a valuable contributor to the Center for Environmental Chemistry and Geochemistry at Penn State, which was awarded a National Science Foundation Integrative Graduate Education and Research Traineeship (IGERT) program.