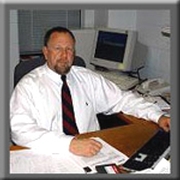 Paul Rosevear received his Ph.D.from our Department in 1980. His thesis work was directed at enzyme-mediated synthesis of the antigenic portion of the blood group O substance with specific C-13 enrichment. Using partially purified preparations of specific galactosyl- and fucosyltransferases and UDP-[1-13C]-galactose and GDP-[1-13C]-fucose, he was able to synthesize Fuca(1-2)Galβ(1-4)GlcNAcβ-hexanolamine. This work resulted in no less than six research papers and a methodological review. Recently, Dr. Rosevear has embarked on two new research initiatives. First, he is using paramagnetic techniques to more rapidly obtain protein global fold structures, which will enhance structural determination of larger proteins. Second, he is using nanotechnology to produce synthetic flexible membranes containing specific transport proteins for the selective uptake, concentration, and release of ions and molecules. Rosevear is currently an Associate Professor in the Department of Molecular Genetics at the University of Cincinnati College of Medicine where he was recruited to establish a state-of-the-art NMR facility. He has served on the Journal of Biological Chemistry Editorial Board and three grant review panels, two for the National Institutes of Health and one fo the American Cancer Society.