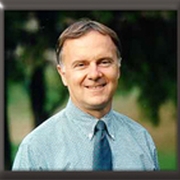 Phil Felgner received his B.S. in Biochemistry in 1972, after an undergraduate career that included extensive involvement in undergraduate research. Phil stayed on at MSU for his graduate work, receiving an MS in 1975 and a PhD in 1978. Following postdoctoral work at the University of Virginia, Phil joined Syntex Research (Palo Alto, Ca) as a Staff Scientist. It was here that he developed the first cationic lipid reagent for gene transfer (Felgner et al., Proc. Natl. Acad. Sci. USA 84, 7413-7414, 1987). This reagent now marketed as Lipofectin, and similar reagents are widely used for molecular biology and gene therapy applications. In 1988, Phil became Director of Product Development for a start-up company, Vical, Inc. With colleagues at Vical and at the University of Wisconsin, Phil made a landmark discovery, showing that functional reporter gene sequences ("naked DNA") could be introduced directly into skeletal muscle without use of viral vectors (Wolff et al. Science 247, 1465-1468, 1990). He and his collaborators were also the first to demonstrate that potent anitviral immune responses could be generated following intramuscular injection of plasmids encoding viral antigens (Ulmer et al., Science 259, 1745-1749, 1993). these findings have led to development of a new class of infectious disease vaccines referred to as "DNA vaccines". Felgner is currently the Director of Proteomics at the University of California-Irvine.