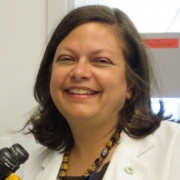 Dr. Rebecca Ellis Dutch is a Professor in the Department of Molecular and Cellular Biochemistry at the University of Kentucky. She is also Associate Dean for Biomedical Education for the UK College of Medicine, where she oversees postdoctoral, graduate and undergraduate educational efforts for the college.

Becky received a BS in Biochemistry and a BS in Microbiology from Michigan State University in 1986, where she performed undergraduate research with William Wells and Shelagh Ferguson-Miller. As a Churchill Scholar, she then completed a M.Phil. degree in Biochemistry from Cambridge University, focusing on plant biochemistry. She received her Ph.D. in Bio- chemistry from Stanford University in 1994, working with Dr. I. Robert Lehman on recombination in herpes simplex virus. Becky then moved to studies of viral glycoproteins in RNA viruses for her postdoctoral training at Northwestern University/HHMI with Dr. Robert Lamb. She joined the faculty of the University of Kentucky in 2000.

Her research, which has resulted in continuous NIH funding since 2001 and numerous other grants, manuscripts, and presentations, focuses on emerging paramyxoviruses, with a particular emphasis on viral entry, assembly and spread.

Dr. Dutch was recently selected as a 2015-2016 University Research Professor in recognition of her outstanding research efforts. Dr. Dutch teaches at both the undergraduate and graduate level, and has twice been named a finalist for the Provost’s Outstanding Teacher award. She is also highly committed to the training and mentoring of young scientists, and has served as the primary mentor for 13 Ph.D. students, 4 MD/Ph.D. students, two postdoctoral scholars and 27 undergraduate researchers, and currently serves as co-PI of an NSF Research Experience for Undergraduates program.

Dr. Dutch is an editor for Plos Pathogens and mSphere, and on the editorial boards for the Journal of Biological Chemistry, the Journal of Virology, and Virology. She has been a member of numerous grant review panels, including serving as a standing member of the NIH VIRB study section. She is also currently President-Elect of the American Society for Virology.