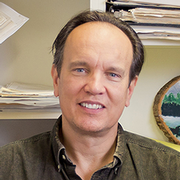 Richard W. Wozniak received his B.S. degree in biochemistry from Michigan State University in 1982 and a Ph.D. degree from The Rockefeller University in 1989.  He carried out his thesis studies in the laboratory of Dr. Günter Blobel and he remained as a research associate in the Blobel laboratory, Howard Hughes Medical Institute (HHMI) at The Rockefeller University, from 1989 through 1994.  In 1994, he joined the faculty in the Department of Cell Biology, Faculty of Medicine, University of Alberta (Edmonton, Canada) where he quickly rose through the academic ranks: associate professor in 1999 and professor in 2004.

Rick's research has focused on the nuclear pore complex (NPC), a massive structure (~50 MDa in yeast) that extends across the nuclear envelope.  The NPC serves as the gateway through which macromolecules are transported between the nucleus and the cytoplasm.  As a graduate student and post-doctoral fellow, Rick cloned and sequenced several pore membrane proteins (pons) the nucleoporins (nups), a family of proteins that form the building blocks of the NPC.  After establishing his independent research program at the University of Alberta, he and his colleagues have made seminal contributions to our understanding of the interactions between various pons and nups in the assembly of the NPC, the interactions of specific nucleoporins with the mitotic spindle, with nuclear transport factors designated karyopherins, and with chromatin.  For example, Rick's work bucked the dogma that all karyopherins moved through nuclear pores by interacting in similar ways with the NPC.  An elegant series of papers from the Wozniak laboratory showed that cell cycle-specific changes in the structure of the NPC turned on an inhibitory mechanism that selectively blocked the import of one member of the karyopherin family into the nucleus and that the mitotic checkpoint protein Mad1 is a critical link between mitotic chromosomes and transport inhibition.

More generally, Rick's group has uncovered activities of the nuclear transport machinery not directly related to cargo movement across the nuclear envelope.  This has led to the idea that nucleoporins and karyopherins control the activities of proteins (e.g. a protein controlling fidelity of chromosome segregation) by modulating their association with the NPC and other subcellular structures.  In turn, this has stimulated crosstalk between investigators working on chromosome segregation and nuclear transport.  Most recently, Rick and his colleagues reported in a 2013 Cell paper that the yeast NPC protein Nup170p serves as a key player in nucleosome positioning and gene silencing.

For his consistent pursuit of difficult but important questions, for his innovative combination of biochemical and genetic approaches to address these questions, and for his uncanny success in getting at incisive answers that contribute to our understanding of the NPC, Rick Wozniak has been recognized through many awards and honors.  He received the Alberta Heritage Foundation for Medical Research (AHFMR) Scientist awards in 2004 and 2009.  He also received an Investigator Award from the Canadian Institutes of Health Research, as well as the HHMI International Research Scholar Award.  He was the winner of the Merck Frosst Prize, presented by the Canadian Society for Biochemistry, Molecular, and Cellular Biology, in 2004 and the AHFMR Klein Prize in 2009.  Indeed, Rick has brought much honor to this Department, as one of its distinguished alumni.