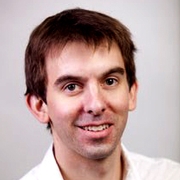 Jake McKinlay is a bacterial physiologist with interests in applying the metabolic traits of useful microbes to benefit society. Jake came to Michigan State University in 2001 and was co-mentored by Claire Vieille and Greg Zeikus. During his time at MSU, Jake earned a ProMSc in Indus-trial Microbiology in 2003 and a PhD in Microbiology and Molecular Genetics in 2006. For his PhD, Jake used 13C-isotopes to trace the path of carbon through the metabolic network of a fermentative bac-terium that naturally converts glucose into succinate – a sustainable alternative to a multi-billion dollar petrochemical indus-try. Jake’s postdoctoral research was with Caroline Harwood at the University of Washington. There he studied a photo-trophic bacterium that converts organic waste into H2, a potential biofuel. Using 13C tracers as a guide, he identified and eliminated the Calvin cycle as a major competitor for electrons against H2 pro-duction. Jake is now an Assistant Profes-sor in the Department of Biology at Indi-ana University. His lab is primarily fo-cused on the metabolism, evolution, and ecology of a H2-producing coculture com-prised of a fermentative bacterium and a phototrophic bacterium bound by obli-gate nutrient exchange. His lab also stud-ies the metabolism and physiology of bac-teria in monoculture, including the use of N2 as an alternative nitrogen source dur-ing fermentative ethanol production.