It is widely recognized that obesity is at epidemic proportions in the United States. Some 60% of adults are overweight of which half are considered to be obese. Unfortunately obesity is not a single disease being accompanied by diabetes, high blood pressure, cardiovascular disease, arthritis, etc. Moreover, it is rapidly becoming apparent that obesity also alters immune defense systems and generates a deleterious undercurrent of inflammatory responses. This has led to some surprising findings many of which remain ill-defined or not understood at this time. For example, it was recently discovered that adipocytes, previously thought to just store fats, can in fact generate substantial amounts of inflammatory cytokines. As adipocytes increase in number and enlarge in the obese, there is increased infiltration of the fatty tissues with cells of the immune system which includes macrophages, neutrophils, T-cells, B-cells ,etc. The interrelationships between these cells and their roles in the etiology of obesity are subjects of intense study. 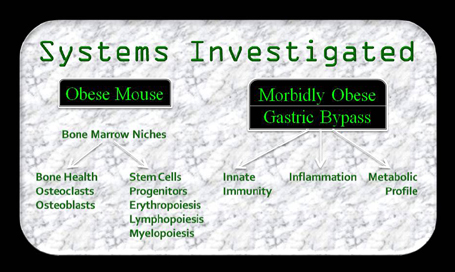 Gastric Bypass. More and more frequently, bypass surgery is being used to ameliorate the problems of the morbidly obese. The outcomes can be impressive with

reductions seen in mortality, diabetes, high blood pressure, and cardiovascular problems in the first year after surgery. However, malabsorption, poor wound healing, and infection can all complicate post surgery recovery. Changes nutrient absorption are being monitored by mass spectrometry with the help of A. Dan Jones, Beverly Chamberlin and Afia Naaz. Dr. Pandu Yenumula, CHM bariatric surgeon and Kathryn Kacynski, RN, Manager of The Sparrow Weight Loss Clinic, are providing bypass patients for progressive assessment of their immune defense capacity, changes in metabolic profiles and inflammatory factors before and after surgery. 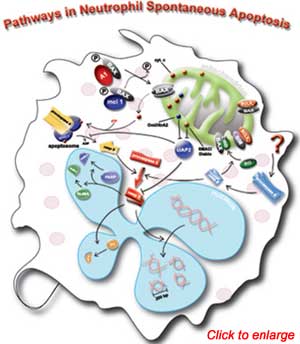 Our lab has been a pioneer in the area of nutritional - immunology. We are interested in the fact that malnutrition and wasting have a rapid and adverse effect on the immune system. Thus, malnourished children as well as those suffering from cancer, AIDS, renal disease, chronic gastrointestinal disorders, etc., where malnutrition or wasting becomes a part of the disease have compromised immune systems. This leads to enhanced rates of infection and mortality. Zinc deficiency is a component of the aforemention diseases and a frequent dietary deficiency noted in the human population. For this reason our studies have primarily utilized the zinc deficient mouse as a model for study. We have recently shown that the lymphopenia that accompanies many forms of malnutrition is caused by disruption of lymphopoiesis.

The latter is caused by heightened levels of apoptosis among precursor T and B-cells that is mediated by the chronic production of glucocorticoids induced during zinc deficiency, protein-calorie malnutrition, wasting, etc. Studies are in progress to determine the effect of suboptimal nutriture in the rate of lymphopoiesis, status of pro and precursor lymphocytes, rates of apoptosis, cell cycle status, cytokine production, etc., using flow cytometry as the primary assessment tool.

Of additional interest is the recent discovery of an important adaptive response to malnutrition. It now appears that the first line of immune defense - the phagocytic cells may be protected during stress-malnutrition. Both the peripheral blood and the marrow of zinc deficient mice contained enhanced numbers of these cells. Interesting human neutrophils exposed to levels of glucocorticoids analogous to those found in malnourished subjects have longer half-lives and greater resistance to apoptosis! Studies are in progress to further define this important observation to include biochemical evaluation of the changes in neutrophils, etc., that make them more resistant to apoptosis during nutritional deficiencies. Protocols for measuring cell cycle status, apoptosis, ploidy, receptor expression, oncogene expression, Ca++ flux, mitochondrial status, phenotypic distribution of leukocytes, etc., are routinely performed. Opportunities exist for students to learn flow cytometry which is an important and highly marketable skill.