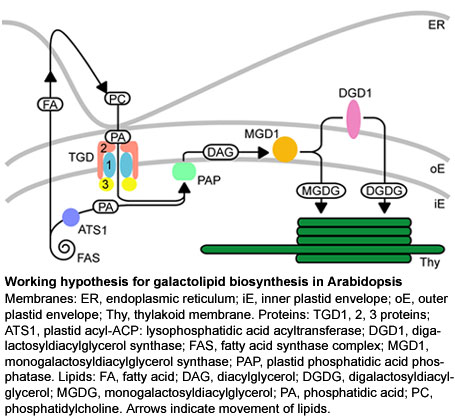 Chloroplasts are the defining plant organelles carrying out photosynthesis. Photosynthetic complexes are embedded into the thylakoid membrane which forms an intricate system of membrane lamellae and cisternae. This membrane contains a specific set of polar lipids: sulfolipid, galactolipids, and phosphatidylglycerol. In the past, we identified and characterized genes of Arabidopsis involved in the biosynthesis of all three lipid classes. Mutants have enabled us to study the function of these lipids. The lipid composition of the photosynthetic membrane is delicately regulated. We discovered that phosphate-deprived plants change their membrane lipid composition to replace phospholipids with non-phosphorous galactolipids. An alternative galactoglycerolipid pathway is induced under these conditions. This alternative pathway is also induced by reactive oxygen species (ROS). A project funded by the US Department of Energy is aimed at understanding the regulation of thylakoid lipid homeostasis and its breakdown under specific growth conditions.

2. Lipid trafficking between the ER and the chloroplast 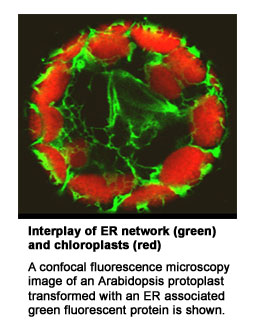 Interorganelle lipid trafficking is essential in all eukaryotes, because different organelles cooperate in the biosynthesis of lipid precursors required for the assembly of specific subcellular membranes. A prominent example is the formation of the photosynthetic thylakoid membranes in plant chloroplasts. Galactolipids are the most abundant lipid components of these membranes and their biosynthesis serves as a paradigm for the study of lipid transfer from the endoplasmic reticulum

(ER) to the chloroplast. A unique collection of Arabidopsis mutants affected in different aspects of ER-to-plastid lipid trafficking is available in my lab. Common to these mutants is a complex, but robust lipid phenotype, the accumulation of oligogalactoglycerolipids giving rise to the trigalactosyldiacylglycerol (tgd) mutant designation. Of the four TGD loci identified at this time, TGD1, TGD2, and TGD3 encode the permease, the substrate-binding protein, and the ATPase subunits of a putative ABC transporter complex in the inner chloroplast envelope membrane. Several lines of indirect evidence suggest that the TGD123 complex mediates the transfer of phosphatidic acid from the outer envelope to the inside of the inner envelope membrane, where it is processed into the diacylglycerol precursor for galactoglycerolipid biosynthesis. The recently identified TGD4 locus encodes a novel cytosolic non-intrinsic membrane protein, which appears to be associated with the ER. It is hypothesized that the TGD4 protein is directly involved in the transfer of lipid precursors from the ER to the outer chloroplast envelope. A project funded by the US National Science Foundation is aimed at understanding the function of TGD proteins and the molecular mechanisms of ER-to-plastid lipid trafficking. 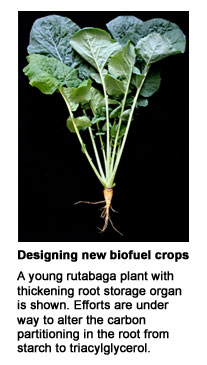 The widely recognized need for the development of biomass-based domestic production systems for high energy liquid transportation fuels is addressed by exploring oil (triacylglycerol) biosynthesis in plants and microalgae. In designing new dedicated biofuel crops, it is desirable to maximize the energy content in the harvestable biomass. 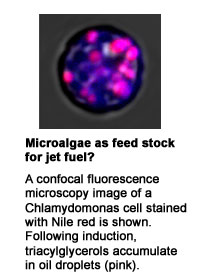 Already plants are available that can provide up to 50% of their biomass in starch, a versatile feedstock for biofuel production. Additional, more readily extractable energy derived from photosynthesis can be provided by redirecting metabolism into plant oils. Plant oils have twice the energy content per carbon atom compared with carbohydrates and can be extracted with low energy inputs and low costs. Plant triacylglycerols can be used directly as a fuel in many applications, including modified diesel engines. Research in my lab has identified transcription factors and other regulatory principles that control plant oil biosynthesis. Taking advantage of these new tools, plants are designed to produce triacylglycerols in vegetative tissues such as leaves or root storage organs. Efforts in my lab to design new biofuel crops are supported by the US Department of Energy funded Great Lakes Bioenergy Research Center. In addition, a project is directed at the rational engineering of algae-based production systems for high energy jet fuels. Initial efforts are focused on the unicellular model green alga Chlamydomonas reinhardtii with its abundance of genetic and genomic resources. The goal is to identify the genes and regulators required for microalgal oil biosynthesis. This project is funded by the US Air Force Office of Scientific Research.