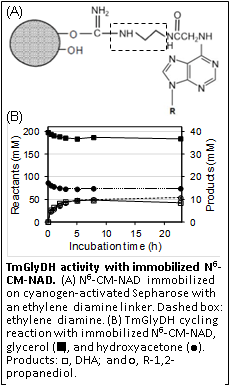 Thermophilic oxidoreductases as industrial catalysts. Dehydrogenases transfer an electron pair and a proton between a cofactor and a substrate. These enzymes could be used to produce many industrial compounds, but their applications remain limited to high-value products due to the high costs associated with cofactor regeneration. In collaboration with Drs. R. Mark Worden and Scott Calabrese Barton (both from MSU’s Department of Chemical Engineering and Materials Science), we have been using Thermotoga maritima glycerol dehydrogenase (TmGlyDH), which produces dihydroxyacetone (DHA) from glycerol, to demonstrate that dehydrogenase-catalyzed reactions can be driven by NADH recycling at an electrode surface.

My laboratory characterized the general stability and kinetic properties of TmGlyDH to identify the best conditions for catalysis. We showed that TmGlyDH is active with the NAD analog N6-carboxymethyl-NAD+ immobilized on Sepharose through a diamino linker, suggesting that the NAD analog can be immobilized on an electrode to allow TmGlyDH activity in a system that reoxidizes the cofactor electrocatalytically.