Biochemical Genomics and Genetics in the 21st Century

We are in the midst of a golden period for research into plant metabolism. The ongoing development and integration of various omics-technologies with established biochemical, molecular and genetic approaches have created a "perfect storm" in which we can computationally, genetically and biologically dissect metabolism between organisms, genomes and across evolutionary time. Historically, the most recent comparable period of advancement was during the 1960’s and 70’s, when radiolabel allowed the pathways for much of plant metabolism as we now know it to be proposed. It is quite clear we are experiencing an analogous period of incredible advancement in our fundamental understanding of plant metabolism at the individual gene, system and genome levels.

Current areas of research include:

Association Mapping for Seed Traits in Arabidopsis and Maize

Since the early 1990s my research has embraced integrating ‘omics technologies with molecular genetics and analytical chemistry in model systems to target previously recalcitrant areas at the interface of basic plant biochemistry and human health. One major goal is to develop the fundamental knowledge base necessary to balance the levels of essential micronutrients in plant-based diets. Past and ongoing research areas centering on dietary micronutrients in plants include the synthesis and function of tocopherols and carotenoids, more recently, B-vitamins and essential amino acids and genome level studies of natural variation for these traits in seed by genome wide association mapping in maize and Arabidopsis. Finally, a recent collaborative effort has been the development of community resources for the transcriptomes and metabolomes for fourteen medicinal plant species. As with our work in model organisms, these resources have the potential to open previously unapproachable areas of plant biochemistry with profound potential for impacting human health. In addition to my contributions to basic science, my research provide me a platform to educate and influence my peers, the public and policymakers on the need and potential for basic research at the interface of plant biochemistry and human health.

Our work in the past 10+ years focused on pioneering genomics-enabled approaches to dissect the core tocopherol and carotenoid pathways in plants. We have at times been quite successful at pathway engineering; however, this work has also highlighted how little we understand about the integration of plant metabolism. For example, high light stress increases leaf tocopherol levels 30-fold while our best pathway engineering effort is but 4-fold. Similarly, the seed phenotypes of carotenoid mutants often cannot be predicted from leaf phenotypes. Such results indicate there are processes/genes outside the core biosynthetic pathways (e.g., transcription factors, metabolite transporters, storage and turnover pathways, cell biology components, etc.) that contribute to desired nutritional phenotypes. Identifying and understanding these additional loci especially in seed, the primary plant tissue used for food, is currently and will remain a major focus of my group. 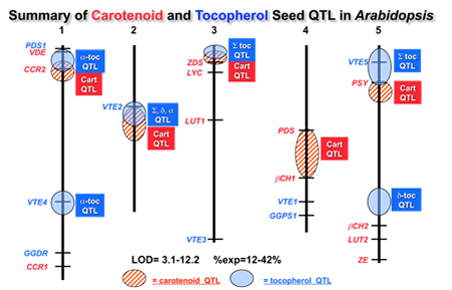 Toward this end the lab has been using quantitative genetics in Arabidopsis to identify and clone novel loci that control variation for specific micronutrients in seed. We have screened four Arabidopsis recombinant inbred populations for 12 carotenoid and 6 tocopherol seed traits. Overall, only 20% of the QTL intervals identified contain known carotenoid or tocopherol biosynthetic genes indicating that even in Arabidopsis, the majority of loci affecting two of the best-studied nutritional traits remain unknown. Identifying and understanding the action of the other 80% of the loci in Arabidopsis (and other plants) that control seed traits is a major focus of the lab.