Nitrous oxide (N2O) is a potent greenhouse gas that is a significant contributor to climate change, with a global warming potential ~300 times greater than that of CO2 on a 100-year time scale. In addition, N2O is also a major cause of stratospheric ozone depletion and production of ground level ozone. Current global N2O levels (325 ppb) are 19% higher than pre-industrial levels and continue to rise at a rate of 0.25% per year.

The major cause of human-induced N2O production is the excessive usage of nitrogen-based fertilizers, which intensifies microbial N2O production pathways (i.e., nitrification and denitrification) as depicted in the figure below. To devise effective mitigation strategies, a process-level understanding of N2O formation and consumption is needed. We are using stable isotopes (e.g., 14N and 15N) to probe the mechanism of enzymes involved in N2O biosynthesis. In particular, by studying the isotopic preference of the central (α) and terminal (β) positions of N2O, we can quantitatively distinguish N2O production pathways and identify N2O sources 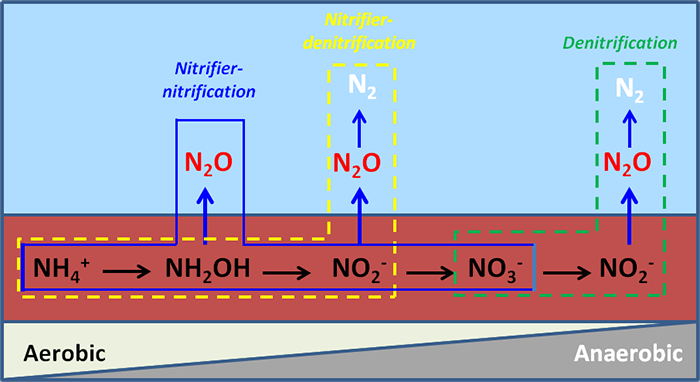