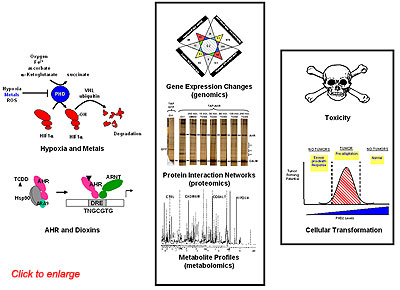 The LaPres laboratory is focused on the PAS superfamily of transcription factors. PAS proteins (named for the first identified members, Per, ARNT and Sim) are transcription factors that play a central role in sensing and coping with changes in various environmental cues. The goal of this research is to completely understand the signaling cascades of certain PAS proteins and how they mediate their pleiotropic effects on biological systems.

The work focuses on two PAS proteins in particular, the hypoxia inducible factor 1a (HIF1a) and the aryl hydrocarbon receptor (AHR) and the role they play in modulating the toxicity of metals and dioxins, respectively. The laboratory is trying to identify novel proteins and signaling cascades that might influence these two transcription factors and therefore control their ability to mediate normal biological responses and aberrant signaling leading to toxicity. In addition, the lab wants to characterize how HIF1a and the hypoxia signaling cascade influences cell cycle and cellular transformation. Hypoxia and HIF1a are critical to the development and progression of cancer and recent research from Dr. LaPres' lab and others suggest that HIF1a plays an early role in a cell's commitment to the transformed phenotype. The laboratory uses a wide range of experimental techniques, including proteomic, metabolomic and genomic technology, to gain novel insights into PAS protein signaling mechanisms and to ascertain possible mechanisms for their complex biological responses.