LIVE LONG AND HAPPILY EVER AFTER

The two major research projects of our lab are on (1) understanding how lifespan of cells can be preserved or extended by intracellular triacylglycerol, and (2) discovering the first therapeutic compound for Alzheimer’s disease. These two projects are supported by grants from the National Science foundation and the National Institute on Aging, NIH, respectively.

The overarching goal of this project is to uncover the molecular and mechanistic details of lifespan regulation by intracellular triacylglycerol. Triacylglycerol (TAG; a.k.a. triglyceride, TG) is a universal neutral lipid in eukaryotes. The best-known function of TAG is storing excess energy. Besides energy provision, we discovered that forcing yeast cells to accumulate TAG, by either preventing TAG hydrolysis or raising TAG biosynthesis, extends lifespan. In contrast, blocking TAG synthesis generates lean cells, but they die early after entering senescence. The correlation between TAG content and lifespan suggests that intracellular TAG performs a function that is required for long-term survival of yeast cells. This function is outside the canonical role of energy storage, and independent of many conserved lifespan extension regimes such as caloric restriction. We favor the hypothesis of Radicals Sink, in which intracellular TAG stored in lipid droplets acts as a sink of metabolic free radicals that otherwise damage biomolecules key to cell survival. 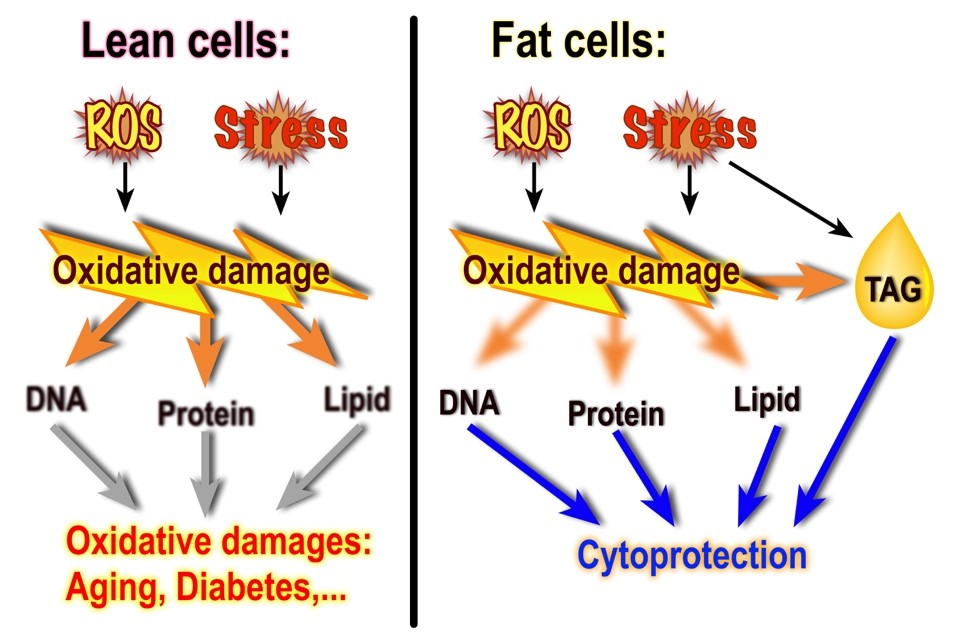 There is an increasing body of evidence supporting energy expenditure-independent functions of neutral lipids. For example, many organisms accumulate TAG when under stress, including starvation of a nutrient and attack of free radicals. Lipid droplets, the organelle that stores TAG, provide anti-oxidant protection to neural stem cells in Drosophila. In humans, a phenomenon called “obesity paradox” refers to the observations that the lowest mortality frequently falls on the overweight (BMI between 25 and 29.5), not the fit (BMI between 20 and 24.5) population. Similarly, “athlete’s paradox” describes that endurance-trained athletes have higher intramyocellular lipid content while enjoying a high oxidative capacity and enhanced insulin sensitivity. Using the unicellular budding yeast as the model, our work will shed light on the molecular basis of longevity and health state facilitation by intracellular triacylglycerol.

Alzheimer’s disease (AD) is an irreversible neurodegenerative disease affecting 47 million people worldwide, and costs 604 billion US dollars every year for medical expenses.  To date, there is no cure or prevention for AD.  The two defining features of AD are Ab plaques and neurofibrillary tangles that are composed of hyperphosphorylated tau.  While the AD drug discovery landscape has been dominated by anti-Ab measures, recurring failures of clinical trials argue strongly that a realignment of the drug target and strategies is needed to make a breakthrough in AD therapeutics development.  Indeed, multiple lines of evidence suggest that the pre-tangle stage of hyperphosphorylated tau aggregates cause diffusible cytotoxicity that likely underlies neurodegeneration.  Screening for compounds that prevent hyperphosphorylated tau from forming the cytotoxic aggregates thus affords a more viable route for AD drug discovery. 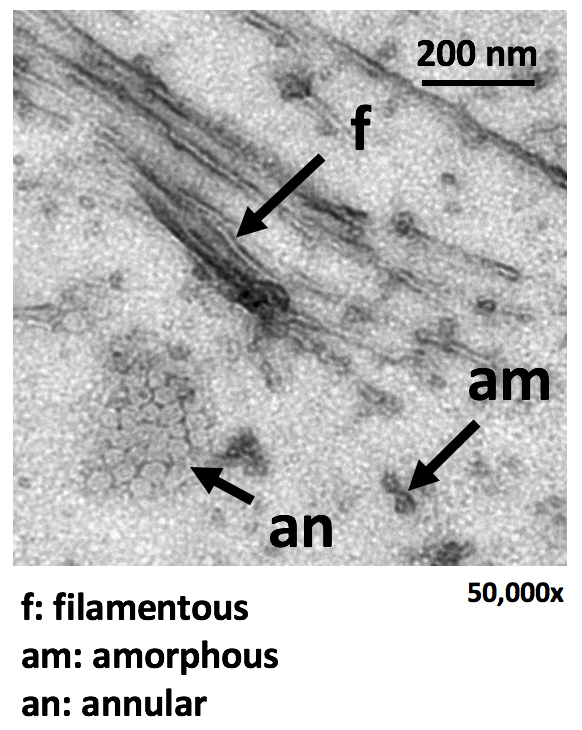 The tangle-centric drug design has yet to come to fruition, due largely to the lack of a feasible means of preparing a tau protein bearing the pathological mark of hyperphosphorylation. To overcome this hurdle, we have developed the PIMAX technology that produces hyperphosphorylated tau (p-tau) in E. coli. P-tau fibrillizes autonomously (without an inducer) via morphologically diverse intermediates (see TEM micrograph), and causes apoptosis of different cells including a neuroblastoma cell line. This is the first hyperphosphorylated tau-based cell model for neurodegeneration.

Besides using p-tau for disease mechanistic studies, we are engaged in AD drug discovery endeavors. Our working hypothesis is that small-molecule compounds that suppress the fibrillization of p-tau (p-tau aggregation inhibitors, PTAIs) are candidates for AD therapeutics. In contrast, those that enhance p-tau aggregation (PTAEs) are potential risk factors for AD and similar neurodegenerative disorders collectively known as tauopathies. Our pilot screen of a 1280-compound library results in encouraging hits. Lead optimization of these candidate is underway. We are currently supported by a grant from the National Institute on Again, NIH, to conduct a 100,000-compound library screen for novel compounds as potential AD therapeutics.

In addition to drug discovery, we collaborate with Cayman Chemical Inc. (Ann Arbor) to develop a kit that features the aggregation of p-tau in vitro. This kit will allow researchers to test their favorite compounds and biological molecules for effects on p-tau aggregation and, if positive, the potential of AD modulation by such molecules. This project has been supported by a phase I STTR (small business technology transfer) grant. The development of a phase II project is ongoing.