The chloroplast is the defining organelle of photosynthetic eukaryotes. It serves as the site of photosynthesis, and is tightly integrated within the metabolic and signaling networks of the plant. As such the chloroplast is a primary site of (a)biotic stress perception and an important component of stress adaptation and tolerance.

In addition to the well-characterized structures of the chloroplast – the thylakoid, stroma, and envelope membranes – the chloroplast also contains highly dynamic lipid-protein particles called plastoglobules (PGs) that are implicated in stress tolerance. These particles are easily visualized in electron micrographs where they stain darkly in the presence of the fixative osmium tetroxide (OsO4). PGs appear to be ubiquitous amongst photosynthetic organisms, as plastid-enclosed osmiophilic particles have been found in electron micrographs ranging from cyanobacteria to angiosperms. 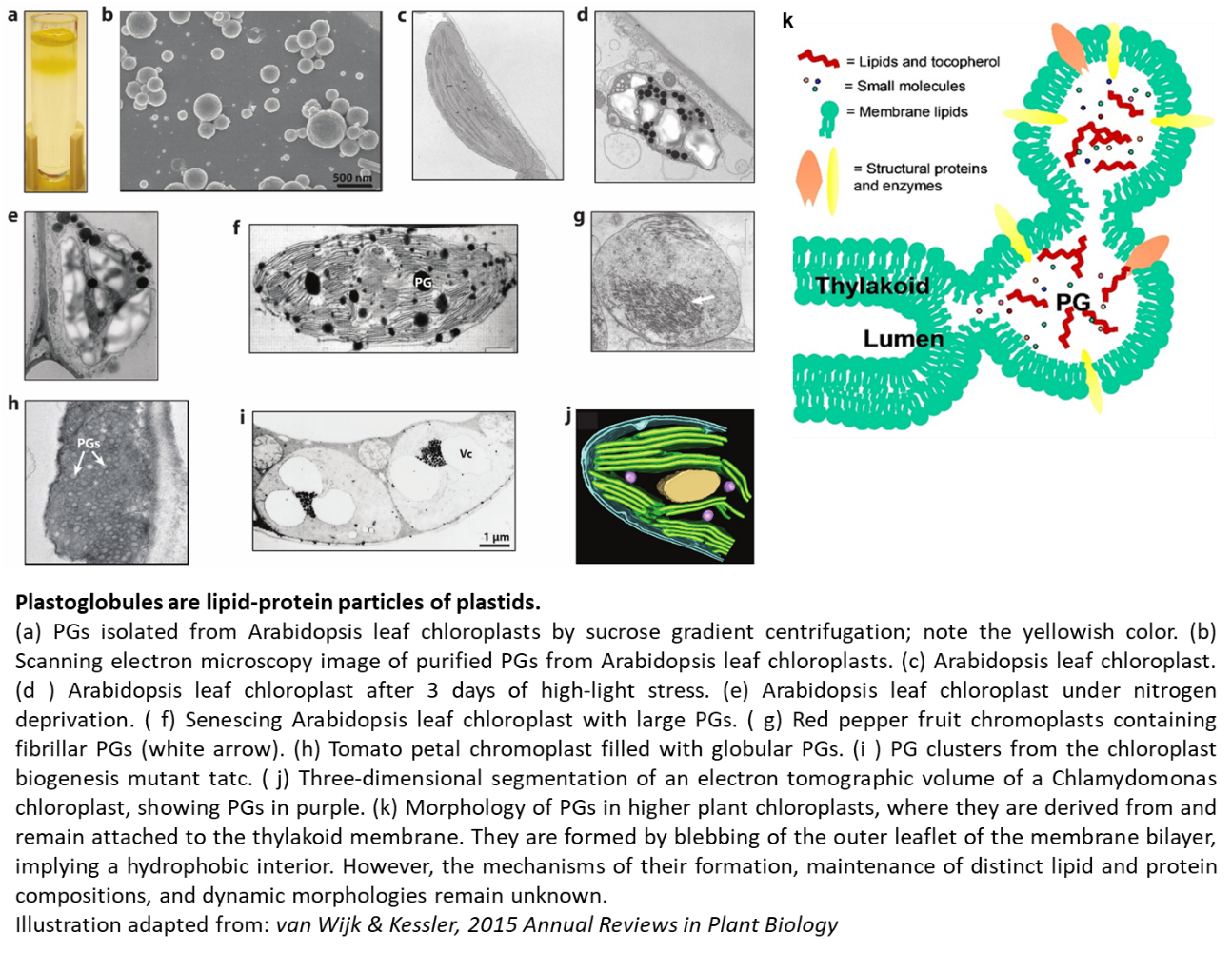 Despite the apparent essential requirement of PGs for photosynthetic life, an active role for PGs only became apparent with the discovery of a small protein population localized at the PG, which included a number of known or putative enzymes such as tocopherol cyclase (VTE1), carotenoid cleavage dioxygenase 4 (CCD4), or allene oxide synthase (AOS). While it has been suggested that there is a core PG proteome of about 30 proteins constitutively present at the chloroplast PG, further evidence has indicated that additional proteins are selectively recruited under specific conditions, representing an additional layer of regulation of PG function. 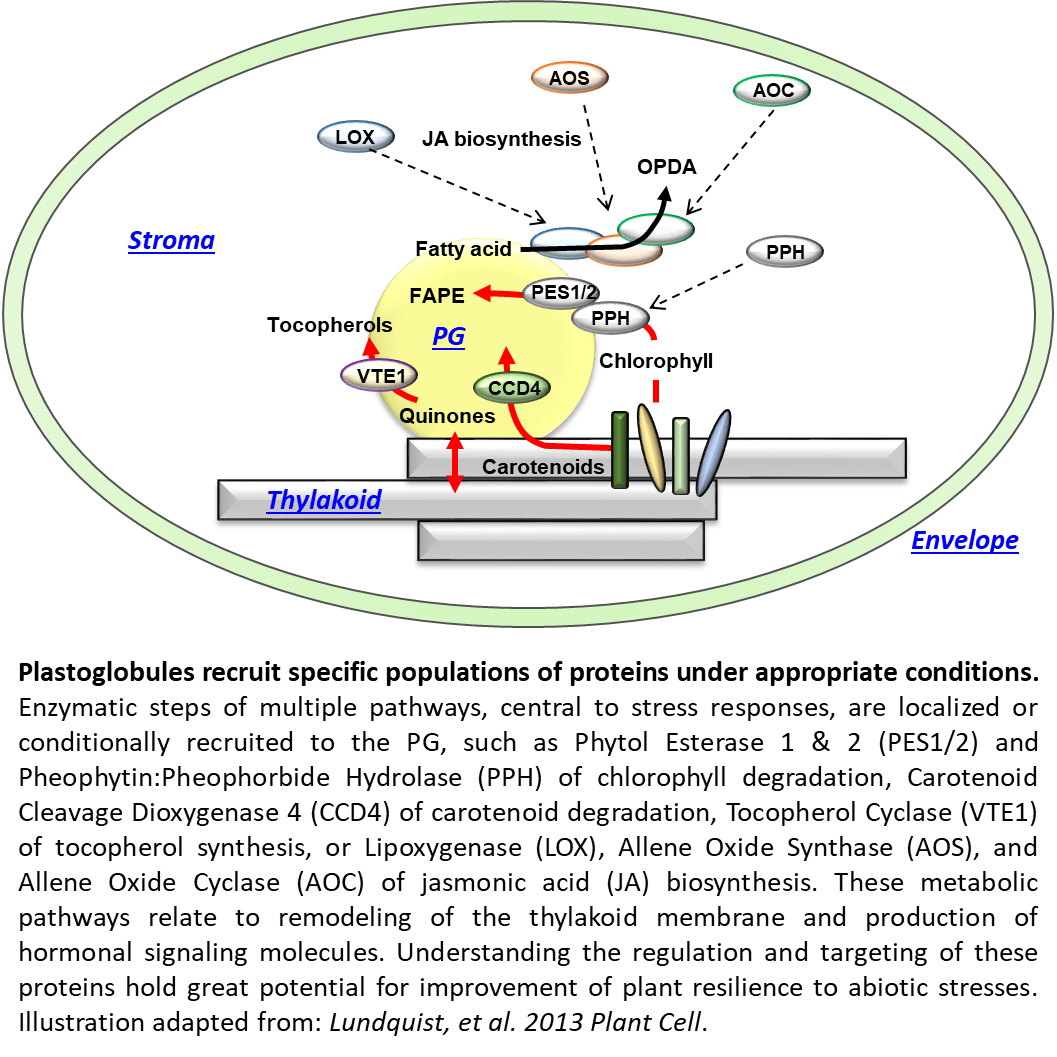 Little is known about the function of PGs, the mechanism of protein targeting to the PG, or the physico-chemical properties underlying PG formation and dynamic morphology. However, hypothesized functions can be advanced. Through my previous studies on PGs, including determination of the PG proteome and detailed characterization of PG-protein mutants, I have proposed a testable model for PG function, incorporating the two broad roles for the PG outlined below.

A TESTABLE MODEL FOR PLASTOGLOBULE FUNCTION 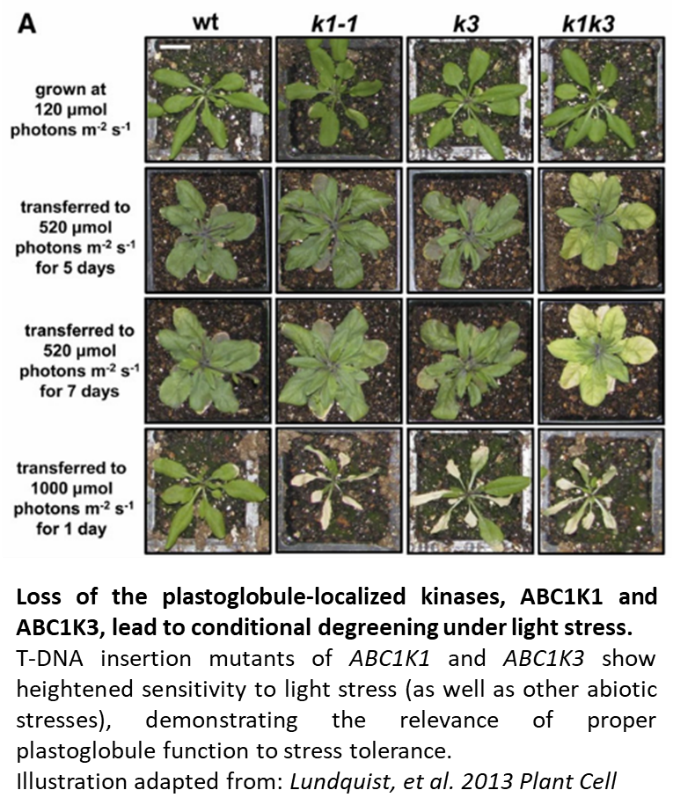 PG function is tightly linked to thylakoid remodeling processes. This is reflected in the highly dynamic, reversible morphology of the PG. PGs are found to swell in size or increase in number, in response to most stresses (both biotic and abiotic). A strong functional link to the thylakoid is logical in light of the physical continuity of PG and thylakoid, enabling the exchange of metabolites and proteins. Consistent with the relevance to stress adaptation, Arabidopsis thaliana mutants impaired in the PG-localized ABC1K1 and/or ABC1K3 kinases show heightened sensitivity to a number of abiotic stresses, leading to alterations in lipid metabolism and recruitment of the jasmonic acid biosynthetic pathway to the PG. Understanding the relationship between PGs and thylakoid remodeling will present significant opportunities for crop improvement under adverse environmental conditions.

Metabolism of prenyl-lipid compounds, such as carotenoids, tocopherols, and phylloquinone is a central aspect of the current PG model. These compounds are crucial to the photosynthetic performance of the plant, e.g. through light harvesting or photoprotection, and are directly relevant to human health. PGs are rich in prenyl-lipid compounds, including tocopherol, quinone, and carotenoid species, and host a number of enzymes in the metabolism of these compounds. Also localized to PGs are several ABC1K kinases which my model has implicated in regulation of prenyl-lipid metabolism. Work on ABC1K1 and ABC1K3 has supported this hypothesis, and identified several candidate targets of phosphorylation. Yet it remains unclear how the various metabolic processes of the PG are controlled and coordinated to enhance stress adaptation. This is a question of great importance as society seeks to expand crop yields and enhance nutritional quality in the face of climate change.

Questions being addressed by the Lundquist Lab include:

1) What protein complexes are present at the PG and how are they regulated?

Research has demonstrated that specific proteins within common metabolic or signaling pathways are recruited to the PG for interaction in metabolons (i.e. metabolic channeling). Moreover, recently published BN-PAGE-MS/MS analyses have further supported the presence of specific protein-protein complexes at the PG and generated hypothesized interactions for testing. The Lundquist Lab is testing for these specific interactions and investigating their dynamic nature. We are addressing this using several parallel approaches, including: i) chemical cross-linking and mass spectrometry, ii) co-IP/pull-down experiments, and iii) yeast 2-hybrid screens. Ultimately we seek to define the complete, dynamic PG “interactome”.

2) How are proteins selectively and dynamically recruited to the PG?

The core proteome of the PG consists of about 30 proteins that are highly enriched or exclusively found in this compartment, as well as a number of additional proteins recruited under specific conditions. The determinant(s) of this PG targeting are largely unknown but are of great interest for fundamental and applied research applications. To explore the mechanism(s) of protein recruitment to the PG we are identifying protein domains critical to protein.

3) How does the protein and metabolite composition of the PG vary in response to different stresses?

Thus far the proteome of PGs has been defined from PGs of a limited set of environmental or developmental conditions. Their distinct protein compositions imply a highly dynamic recruitment of proteins to the PG to accomplish diverse functions, but this prospect remains largely unexplored. We are investigating the varying protein and metabolite compositions of PGs under distinct stresses to provide new insights into the likely broader roles of PGs and plant stress responses more generally.