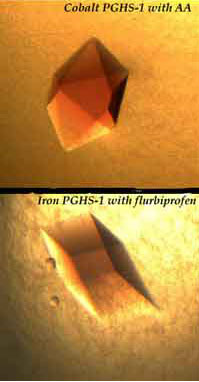 Prostaglandin endoperoxide H synthases-1 and -2 (PGHS-1 and -2) are heme-containing, integral membrane proteins which catalyze the committed step in the biosynthesis of prostaglandins, a large group of bioactive, oxygenated C18-C22 compounds. PGHS-1 and -2 convert arachidonic acid to prostaglandin H2, via the cyclooxygenase (COX) and peroxidase (POX) reactions. Prostaglandin H2 is then converted by specific synthases into bioactive prostaglandins and thromboxanes. The understanding the structure and function of the PGHS isozymes has been the focus of much research because they are the major targets of nonsteroidal anti-inflammatory drugs (NSAIDs) which include the "over-the-counter" drugs aspirin and ibuprofen. The PGHS isozymes have been implicated in the pathophysiology of arthritis (inflammation and free radical damage), cardiovascular disease, cancer (tumor production, metastasis and carcinogen activation), and various neurological disorders like Alzheimer's and Parkinson's diseases. NSAIDs are already used to treat symptoms of inflammatory and cardiovascular disease. Knowledge of the structure of these enzymes is a prerequisite for understanding how to improve our ability to control the activity of PGHS isozymes through drug therapy.spectroscopy. 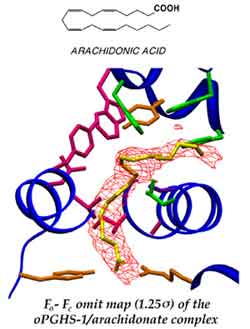 Despite the differences in their physiological roles, the structures and catalytic functions of PGHS-1 and -2 are virtually identical. However, a handful of amino acid substitutions give rise to differences in ligand interactions between the isoforms. The structure-function relationships in PGHS isozymes are actively being studied in my laboratory, using X-ray diffraction and difference Fourier analysis. Our general goals are to determine the mechanisms for free radical catalysis involving PGHS, to develop models for free radical migration, and to determine fatty acid ligands and similar compounds can bind to PGHSs. We and our collaborators studying the functional consequences of subtle atomic alterations in structure using a combination of X-ray crystallography, molecular biology, resonance Raman spectroscopy, and EPR.