As the world population grows, our need for food and fuel increases. Yet the amount of arable land is limited, and often there is now a competition between food and fuel crops. In addition, changes in the global climate may impact future yields. Drought, heat and cold are the abiotic stressors most commonly affecting yield. To continue to be able to provide sufficient food and fuel, we need plants that show accelerated growth, have a higher grain, or cell wall yield/quality, and are more resistant to biotic and abiotic stressors. My lab is interested in how plants perceive, signal, and respond to environmental signals both, on the local as well as on the systemic level. Our ultimate goal is to generate plants with increased stress tolerance and/or yield.

To better understand plant development in response to environmental signal, my lab is using two approaches:

1. Dissecting the mechanism of phloem transport and its role in long-distance signaling during plant development and in response to abiotic stress.

Unlike animals, plants cannot escape adverse conditions. To respond to changes in their environment, plants evolved mechanisms that detect changes, communicate them to different organs, and adjust development accordingly. Plants have developed two long-distance transport/signaling systems to allow for an efficient exchange of information (signals): the xylem for water and mineral distribution from the roots throughout the plant, and the phloem. In the past several years, the view of phloem function has evolved from that of simple assimilate transport system to a trafficking system for stress signals and developmental regulators in the form of small molecules, peptides/proteins, nucleic acids, and more recently, lipids. Our analysis of Arabidopsis thaliana phloem exudates led to the identification of fatty acids and lipids within the phloem including phosphatidic acid (PA), phosphatidyl choline (PC), phosphatidyl inositol (PI), di- and triacylglycerols (DAG and TAG, respectively. At the same time, we were able to detect putative lipid-binding proteins (Guelette et al., 2012; method: Tetyuk et al., 2013)). Phospho-/Glycerolipids were not expected in the aqueous environment of  the phloem. Accordingly, the function of most of these phloem lipids remains unknown! In animal systems, lipids are transported in the blood while bound to proteins and are transported to other tissues for storage, modification, or degradation (e.g. cholesterol); others transport vitamins (e.g., vitamin A) or serve as messengers and modulate transcription factor activity. While these lipid-protein mechanisms are key to mammalian development and health, their possible importance in plants is virtually unexplored. We proposed that phloem (phospho-) lipids participate in long-distance signaling (Benning et al., 2012). They are likely released, sensed, and moved by phloem lipid-binding proteins. 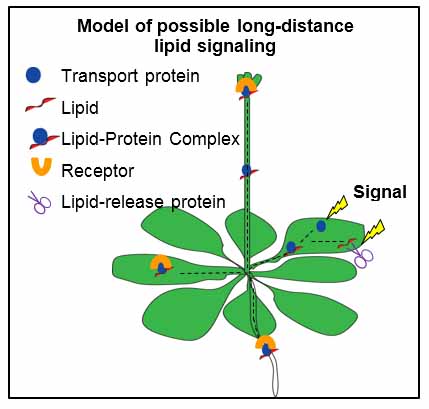 My laboratory is studying the function of several of the phloem lipid-binding proteins. Three if these proteins bind phosphatidic acid, a lipid known to act in the intracellular ABA signaling path related to several abiotic stresses (water-stress, osmotic stress, etc). We are investigating if phosphatidic acid can act in long-distance signaling as well and if the phloem lipid-binding proteins act in a “relay” or in independent signaling pathways. In addition, other phloem proteins may interact with different lipid species. We are examining their lipid-binding properties, their effect on the phloem-lipid composition (LC-ESI-MS) and plant development (Microscopy), their phloem mobility, and if they convey resistance to abiotic or biotic stress while maintaining a competitive yield. Ultimately, we plan to transfer our findings to generate drought tolerant and/or high yielding crop plants.

Rapidly growing plants display a phenomenon called “tissue tension”. When they are cut longitudinally, they curve outwards with the epidermis on the concave side of the section. Tissue tension has been interpreted as the manifestation of two conflicting forces: the epidermis is under tension because it is growth limiting, while the inner tissue does not limit growth and is under compression. During examination of the cell ultrastructure of rapidly growing plants, osmiophilic particles (OPs) had been observed in several plant species. These particles are 80-300nm in diameter. Electron microscopy and labeling experiments had shown that they are closely associated with the outer epidermis of growing tissues, are traversing the secretory pathway, and are, at least in part, proteinaceous. Their identity remains unknown.

We used a proteomics approach to identify novel proteins involved in regulating plant growth by comparing the protein profile of slow versus rapidly growing coleoptiles and coleoptile epidermis. Growth was induced using the phytohormone auxin (indole acetic acid). Auxin regulates cell division and cell elongation by altering cell wall plasticity. It controls cell differentiation, leaf abscission and fruit formation. It mediates plant response to light, gravity, pathogen and abiotic stress.  Auxin function is dependent on several factors: (I) the differences in auxin distribution/concentration within tissues and (II) differences in cellular auxin concentration, both on which are based on auxin transport; and (III) auxin perception and signaling within the cell. 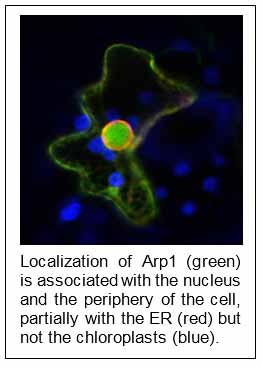 Using a proteomics approach, we identified four novel proteins that are associated with auxin-induced rapid growth in corn coleoptiles (Li et al., 2013). We are currently studying the function of these proteins. One protein, Arp1 (auxin-responsive protein 1) is induced rapidly and transiently by auxin, an increase that precedes the expression of cell wall biosynthetic genes. Arp1 expression is associated with the vascular bundles in coleoptiles. The protein is localized in the periphery of the cell but can also be detected in the nucleus. Upon transfer to light, plants overexpressing Arp1 are larger and display  early flowering. Based on our findings, we believe that Arp1 acts at the intersection of environmental (light) and hormonal (auxin) signals affecting plant and vascular development during early plant growth. We propose that in response to an environmental signal, Arp1 moves from the receptor to the nucleus, where it either regulates gene expression or cell division, thus leading to enhanced plant growth. 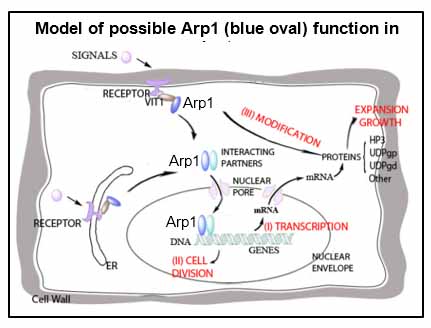